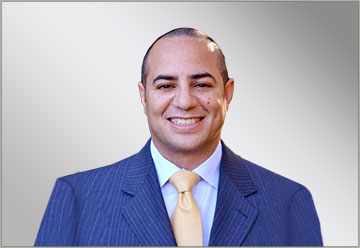 Emile Jonathan Harmon has been working in the legal profession since he was a child. His parents are founders of Harmon and Robertson, P.C., a private family firm that originated in Boston Massachusetts. Following in his family’s footsteps, Emile attended law school, initially at St. Mary’s University in Texas before transferring and finishing at Sandra Day O’Connor College of Law in Tempe Arizona. Emile graduated in 2006. He both graduated early and passed the bar early on his first try.

Emile loves the trial work that comes with defending those that have been injured or wronged due to the negligence of others. He has litigated over 75 combined bench and jury trials in all courts across the state. He has been on the successful side of every jury trial he has tried in civil and criminal courts. He has received six-figure awards in both jury trials and mandatory and compulsory arbitrations.

Of course, if possible Attorney Harmon attempts to settle his cases in a manner that is a positive outcome for his clients in hopes of avoiding the stress and length of time that comes with litigation and trials. As such, Emile has settled millions of dollars of cases for his clients and has engineered the presentation of evidence in a manner in which insurance companies effectively settle cases rather than try them. With large powerful entities such as insurance companies or the government, it is important to have an attorney who is known for successfully presenting cases at trial.

Attorney Harmon is also a charter member of the board of the Rio Salado Bank and a member of the Tempe South Rotary. He has two children in elementary school, a son at the University of New Mexico and a daughter who is a freshman at Arizona State University. Emile and his family are lifelong New England Patriots fans. When not working, you can catch Emile watching a game or playing golf.

"They did a very good job on my case. It took a long time and I got done!"

“Excellent service and great attorneys. All I had to do was focus on recovery from my accident and they took care of the rest.”

“I was involved in a pretty bad accident in January 2013. Having used Kelley Durham and her firm in the past, I immediately reached out to her and asked for advice before talking to anyone else. She immediately picked up the case. Kelley and her team handled everything from day one. This allowed me to focus on getting back to the quality of life I had pre-accident.”